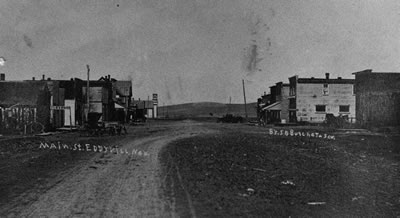 The Homestead Act signed into law in 1812, provided that any person who was 21 years of age or was head of a family could claim up to a quarter section of land for a payment of $10.00 filing fee. If the person lived on the claim for five years, he or she was granted final patent. This and the coming of the railroad was instrumental in bringing families west.

The construction of the Kearney and Black Hills Railroad line in 1890 generated the move of the rural stars and post office functioning under the name of Congdon about one half mile west of the present location of Eddyville.

There are different stories depicting how the town was named but most agree that the superintendent of the K. & B. H. railroad named it after Miss Eddy of Christian Science fame, who was an acquaintance of his and was visiting in the vicinity at the time. 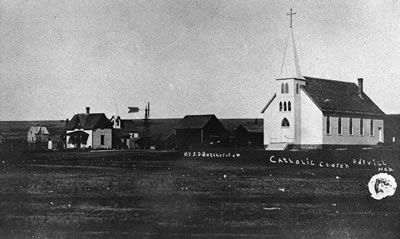 In 1884 John B. Colton, Veteran of the Civil War and famed as one of the Jay Hawkers who crossed the plains in 1849 and nearly perished in Death Valley, started acquiring a ranch of 5000 acres about a mile north of Eddyville.

This is known as the “Buzzard Roost Ranch Company”. It was named for the deep canyon located on the ranch which had many American Elms growing on its banks in which turkey buzzards made their homes and hatched their young.

The town site was purchased in 1890 and was incorporated in 1893. In the early 1900s Eddyville boasted of a population of 350 residents, with 3 banks, 3 churches, many shops and stores and the largest hotel in the Woodriver Valley.